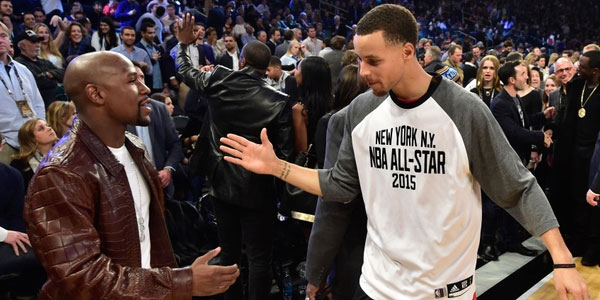 Floyd Maywether keeps on playing with high stakes as he cashes in another two hundred grand.

Floyd Mayweather Jr. is not just the best fighter in the world, but he also has a place amongst newsworthy gamblers. The boxer living a high profile celebrity life was wagering USD 200,000 on the Golden State Warriors and he doubled the money as the Californian team has beaten the Houston Rockets in the NBA playoffs Saturday night.

With his recent win against Manny Pacquiao, Mayweather, who nicked simply as “Money”, revealed that he is truly the best fighter of his generation. Though he hardly risked anything during the match against Pac-Man, he is a keen gambler in his private life. And he also lives at large, and celebrates at large like this time, when he casually jumped on his private jet to fly to Seattle, just because he was in the mood to do so.

Splash for the cash

After reportedly making more than USD 150 million with the fight against Pacquiao, Mayweather has returned to his way more cozy lifestyle flashing two hundred grand at a sportsbook at ease like normal people play coins on slot machines. Then instead of taking the bus, he grabbed his bag and hopped on his plane together with his cousin Dejuan Blake to visit the “nearby” Seattle.

The Warriors entertained Houston Rockets in Game 3 of the Western Conference Finals of the NBA Playoffs and have duly won the game 115-80 doubling Mayweather’s money. Money shared this with his Twitter followers of course, and he posted his betting slip proving that he placed a wager of USD 200,000 on Golden State, writing “Splash for the Cash. 200,000 dollars in 48 minutes.”

He actually spent less time in the ring against Pacquiao to grab an instant USD 100 million check a few weeks earlier and to cash in more after pay-per-view revenues, but he had to work for that. While this time he only had to enjoy the game and cheer to Stephen Curry and co., to help him to become the gambler of the moment.

Mayweather is enjoying life seriously after The Fight of the Century has panned out, wagering at large since he defeated Pacquiao by unanimous decision at the MGM Grand Garden Arena in Las Vegas. He recently placed in a total of USD 350,000 on the fight between Gennady Golovkin and Willie Monroe Jr. and on three NBA matches involving the Houston Rockets and the Los Angeles Clippers as well as the Atlanta Hawks and the Washington Wizards, celebrity gambler news reported.

After Golovkin knocked out Monroe in the sixth round, the Rockets won at the Clippers in Game 6 of the Western Conference 119-107 and the Hawks were up 3.5 in the second-half spread in the Eastern semis, he only had one game left on his betting slip. As the Houston Rockets were up 4.5 in the second-half spread in Game 7 against the Clippers, Mayweather cashed in USD 827,272.73, so virtually making half a million dollars with these four sporting events.

Money posted his betting slip with his usual lack of modesty that characterizes him: “The last 4 days have been great. I’m getting paid while watching others entertain and perform. I don’t do anything for free. I bet USD 350,000 and walked away with 827,272.73.”

More than six million dollars on a single game

And it is not a new feature from him at all earning money while watching games. In October he made USD 4 million with a streak betting on NFL games. He once placed a USD 800,000 wager on the Arizona Cardinals to beat the Oakland Raiders with a 3.5 handicap. The Cardinals defeated the Raiders 24-13 eventually and the prize of USD 1.5 million went to Mayweather.

He pulled a similar trick a week before, then backing the Denver Broncos against the New York Jets to collect USD 1.44 million on an 815,000 wager. His most astonishing win on a bet came in 2013 with an NBA game. Mayweather placed a wager of USD 5.9 million on Miami beating Indiana then, and after LeBron James and co. defeated the Pacers, he was rewarded with a stack of USD 6.49 million.

Though he is a keen gambler in his private life, he was far from this attitude when he fought maybe the most important match of his life against Manny Pacquiao on May 2 in Las Vegas. Mayweather took a defensive approach and controlled the game while keeping himself distant from the punches of the Filipino. 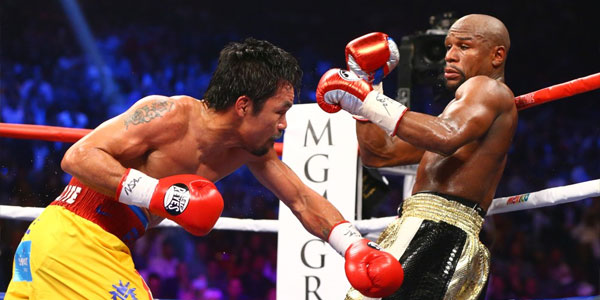 He played safe and won, however he risked practically nothing other than his reputation and his undefeated record, as he was granted a purse share of USD 120 million in advance, just to participate in the fight.

Considering that amount and the USD 400 million he collected in the prior stages of his career, making him the highest paid athlete in the world in the last three years, a hundred grand to him is just like coins to average people indeed. He is right then after all, why not to gamble a few million bucks if he can?